It is a statistical method to analyse the relationship between two continuous (quantitative) variables. One variable, denoted as x, is regarded as predictor, independent variable. Other variable denoted by y is known as response, dependent or target variable.

It is termed as simple because it involves only one predictor, in contrast with multiple linear regression which involves more than one predictor.

With machine learning aspect, we solve statistical relationship rather than deterministic relationship like relationship between celsius and fahrenheit, which is determined by equation F = (9/5)C + 32. 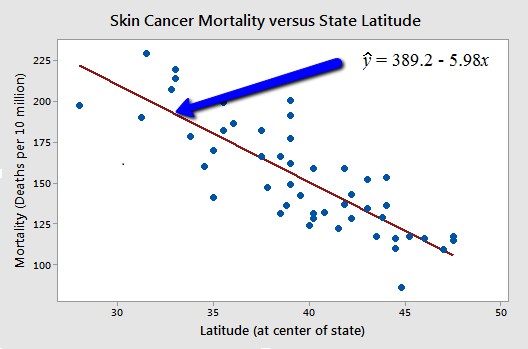 Similar statistical relationship can be found in following instances

In the above figure, the linear line is the hypothesis. 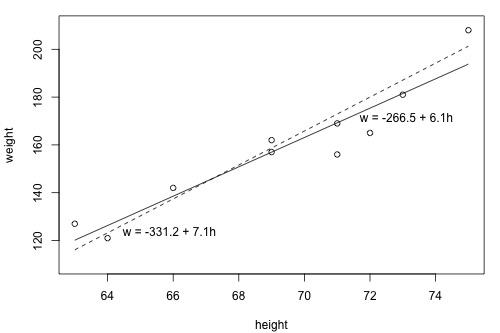 In the above plot, we can see the multiple line equations with different set of parameters and each representing an approximate line of fit. Lets consider the line equation y = -266.5 + 6.1 x. For first sample, x=63, we find y` as 120.1, which is 6.9 less than ground truth value.

The difference between y and y` is referred as prediction error or residual error.

A line that fits the data “best” will be one for which the n prediction errors — one for each observed data point — are as small as possible in some overall sense. We can find the best fit line by using the least square criterion, which minimizes the sum of the squared prediction errors.

Why square the prediction error?

Lets check how the other line fits and its corresponding prediction error.

To formulate the best parameters (intercept \(b_0\) and slope \(b_1\)) for the line equation, a formula is determined using methods of calculus. We minimize the equation for the sum of the squared prediction errors:

The formula for \(b_0\) and \(b_1\) is derived from least squares criterion. The resulting equation:

\(b_1\), it represents that for every unit (inch) increase in height, the weight increases by 6.1.

Consider we have a population sample of High School GPA and College Entrance test score. 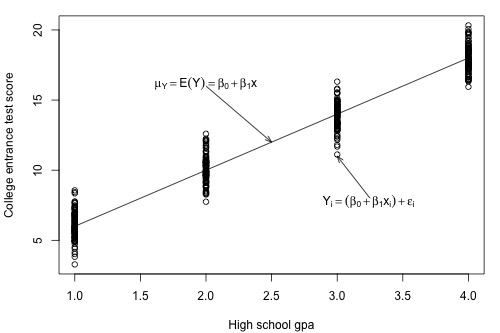 Practically it is impossible to get all the available data, thus we have to rely on taking the sub-population of the data and build a model on that sub-population. Let us take three random data point for each GPA score as mentioned in the plot below, thus resulting in a total of 12 data points. 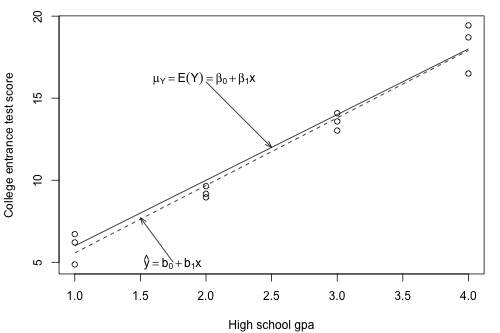 We are now ready to summarize the four conditions that comprise “the simple linear regression model:”

One of the conclusions made previously is that each sub-population have an equal variance denoted by \(\sigma^2\). It quantifies how much response \(y\) vary around the unknown mean population regression line \(\mu_Y\ =\ E(Y)\ =\ \beta_0\ +\ \beta_1\ x\).

Consider an experiment where we are measuring the temperature (Celsius) using two different brands of thermometer A and B. Below is the plot for converting these temperature from Celsius to Fahrenheit with estimated regression line for each brand.

For Brand A - Celsius vs Fahrenheit 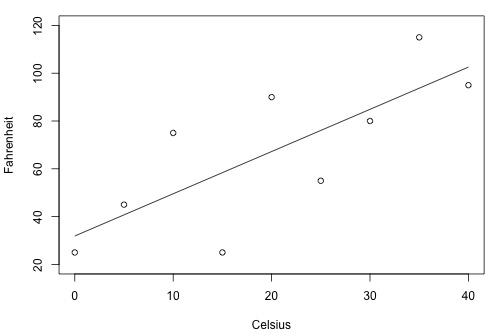 Figure 7: Brand A - Celsius vs Fahrenheit

For Brand B - Celsius vs Fahrenheit 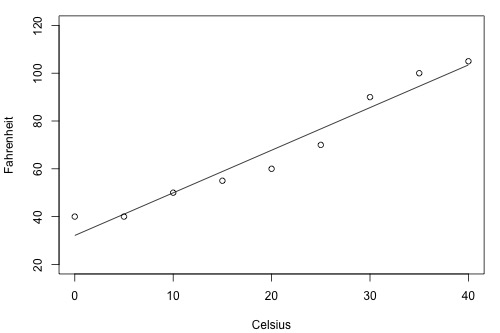 Figure 8: Brand B - Celsius vs Fahrenheit

To find how precise the future predictions are, we should know how much the response \((y)\) vary around the mean population regression line \(\mu_y\ =\ E(Y)\ =\ \beta_0\ +\ \beta_1\ x\). But we cannot estimate the value of \(\sigma^2\), which is population parameter, whose true value we’ll never know. The best is we can estimate it.

Let us understand, how variance is estimated from the below plot of IQ distribution. The population mean of the plot is at 100, how much does the IQ vary w.r.t to mean. 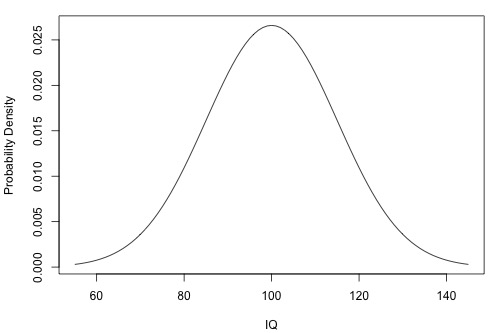 In numerator, we have summation of deviation of response \(y_i\) from \(y^`\) estimated mean in square units.

In denominator, we have n-1, not n since we are estimating \(y^`\), which reduces degree of freedom by one.

Let’s think about population variance \(\sigma^2\) in the simple linear regression setting. Previously, we have seen plot between GPA vs Entrance Test score. For each sub-population we have mean. Each sub-population mean can be estimated using regression equation \(y^`_i\ = b_0\ +\ b_1\ x_i\)

The mean square error estimates \(\sigma^2\), the common variance of the many sub-populations. Here, instead of n, we have n-2, because we are estimating two parameters \(b_0\) and \(b_1\), thus reducing the degree of freedom by two.

Consider two different examples - each representing a relationship between x and y.

Weak relationship between x and y

In the above plot, there are two lines. One representing a horizontal line placed at the average response of \(\bar{y}\) and another line with shallow slope represents the estimated regression line \(\hat{y}\). Since slope is not steep, the change in predictor x doesn’t change much in response y. Even the data points are closer to regression line.

Some of the metrics to represent the relation between response and estimated response.

SSR - It refers to Sum of Square Regression. It quantifies how far the estimated regression line is w.r.t horizontal no relationship line, the sample mean or \(\bar{y}\).

SSE - It refers to Sum Of Square Errors. It quantifies how far the data points \(y_i\) vary from the estimated regression line \(\hat{y}\).

Strong relationship between x and y

In the above plot, there is a fair amount relationship between x and y, with steeper slope of the regression line. It suggests that change (increase) in x leads to substantial change (decrease) in y. Here, we can see the data points touches the estimated regression line.

Coefficient Of Determination or r-squared value

Note Here, x is associated with y, different from causation. 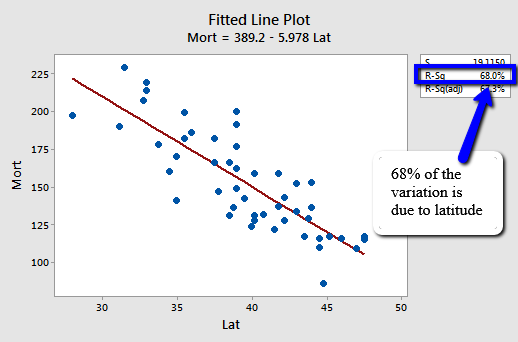 It is directly related to coefficient of determination \(r^2\).

The slope of the estimated regression and the correlation coefficient has similar sign.