What is Mixed Precision Training

For instance, In Pytorch, the single-precision float means float32 and by default, the parameters take float32 datatype. Now if we have a parameter (W) that could be stored in FP16 while ensuring that no task-specific accuracy is affected by this movement between precision, then why should we use FP32 or FP64?

Since the introduction of Tensor Cores in the Volta and Turing architectures (NVIDIA), significant training speedups are experienced by switching to mixed-precision — up to 3x overall speedup on the most arithmetically intense model architectures.

The ability to train deep learning networks with lower precision was introduced in the Pascal architecture and first supported in CUDA® 8 in the NVIDIA Deep Learning SDK.

Why MPT is important

FP16 requires 2 bytes, as the number of bytes is reduced to capture the same numerical entity, it reduces the amount of memory required to train a model and helps in increasing the batch size for our training. And also the data transfer of type FP16 is faster compared to FP32 and FP64. 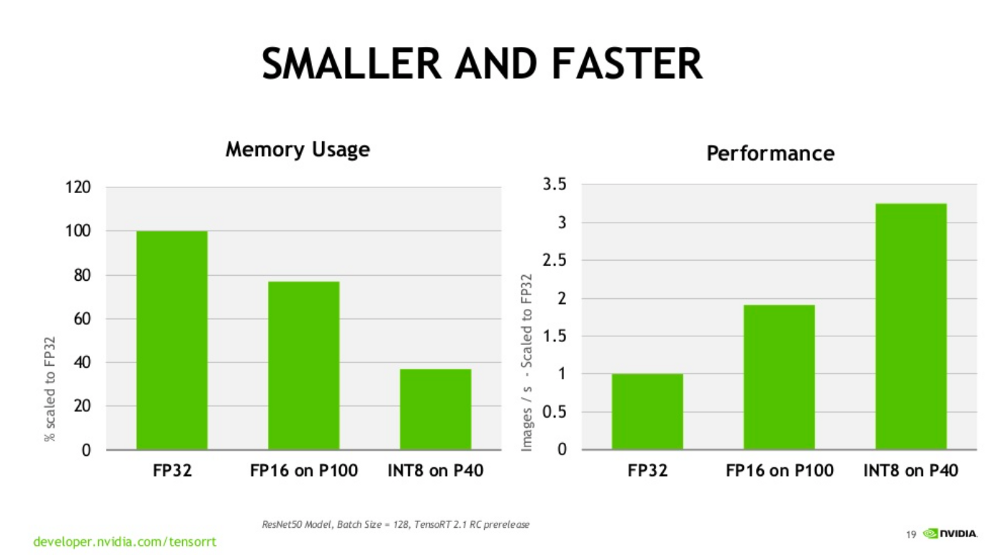 Though it’s half the amount of memory in FP16, few folks many consider 2MB is not worth the headache for moving to mixed-precision, then

Consider the following situation of using Resnet50, The 50-layer ResNet network has ~26 million weight parameters and computes ~16 million activations are in the forward pass. If you use a 32-bit floating-point value to store each weight and activation this would give a total storage requirement of 168 MB. By using a lower precision value to store these weights and activations we could halve or even quarter this storage requirement, i.e. for 42 million transactions, FP16 requires 84MB.

There is a significant improvement in memory required for the same number of parameters. 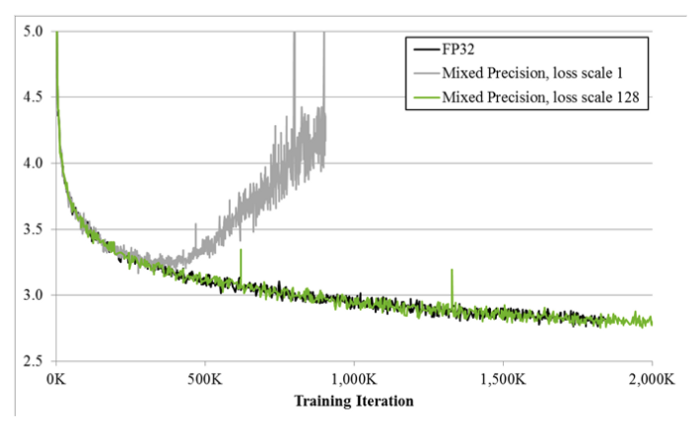 The first point, Porting model to use FP16 is simple, we access the model parameters and move it float16 or half-precision as widely known. It is similar to changing the dtype of a variable.

The second point, Adding loss scaling to preserve small gradient values, refer to scaling the parameter by multiplying alpha value to it, before backpropagation and then unscale it by dividing the gradient by alpha before updating the weight. Loss scaling is done to avoid the gradient exploding/vanishing.

Interestingly, there is adaptive scaling technique is introduced for a layer-wise update of parameters by alpha.

What happens when we switch to Mixed Precision

Nvidia GPUs offer up to 8x more half-precision arithmetic throughput when compared to single-precision, thus speeding up math-limited layers. The term Mixed Precision Training is realized because the training utilizes both the half-precision and single precision representations.

Based on research, certain operations tend to cause over or underflow of a parameter or a variable, and some act intact within FP16, ultimately a few lists are generated like AllowList, DenyList, and InferList, which mentions which ops should take place with FP16 and vice-versa.

With recent updates in deep learning frameworks, a technique called Automatic Mixed Precision has been introduced. It helps the developers in performing these casting and scaling operations automatically

In those frameworks with automatic support, using mixed precision can be as simple as adding one line of code or enabling a single environment variable. Currently, the frameworks with support for automatic mixed-precision are TensorFlow, PyTorch, and MXNet.

Note, Nvidia’s tensor cores are designed in such a fashion that keeping the dimension of the matrix as a multiple of 8 helps in the faster calculation. Do read NVIDIA’s Mixed Precision article to understand,

Details related to How to set the alpha value, How to scale & unscale a parameter, how the performance is affected if a poor scaling factor is chosen, how to match the performance of FP32 using FP16, check out the reference link to NVIDIA Mixed Precision.